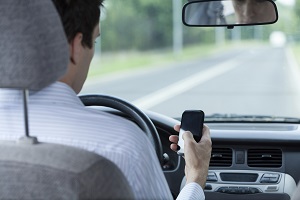 Towards the end of 2014, New York State adopted a new system for penalizing drivers that were caught using cellphones behind the wheel. These new Distracted Driving laws made New York one of the toughest states in the nation when it comes to punishing distracted drivers, and for good reason. Distracted Driving is a serious hazard on roads and highways not only in New York, but throughout the entire United States.

As awareness about the dangers of Distracted Driving have increased nationwide, so have the number of tickets associated with this reckless behavior. According to recent data, one of the areas in New York where drivers are penalized most often for texting while driving is right here in Westchester County.

New York’s Distracted Driving penalties are extremely harsh and designed to make anyone thinking of taking a phone call, tweeting, or texting behind the wheel think twice before they take their phone out of their pocket. For the entire month of April, New York Police departments will be adopting new policies and techniques designed to discourage potential distracted drivers, and catch and punish those guilty of not giving the road their full, undivided attention.

Here are some statistics related to Distracted Driving that show just how serious this problem has become:

• According to the National Highway Traffic Safety Administration, 10% of all drivers under the age of 20 that were involved in a fatal crash were distracted at the time of the accident.
• From 2005 to 2011, there was a 143% increase in cell phone-related accidents in New York. For context, alcohol-related crashes decreased by 18% during the same time period.
• In 2011 alone, there were 25,165 accidents involving a distracted driver in New York. compared to 4,628 caused by alcohol-related driving

At Fellows Hymowitz Rice, New York and New Jersey Personal Injury law firm, we fully support these new penalties and sincerely hope that they help in cutting down on the number of distracted drivers. All motorists have a responsibility to share the road safely and respect other drivers.

When drivers use cell phones behind the wheel or become otherwise distracted, they put themselves and everyone around them at risk and must be held accountable for this irresponsible behavior.

If you or a loved one has been injured by a distracted, intoxicated, or negligent driver, you will need an experienced New York Personal Injury and Auto Accident attorney on your side. Call Fellows Hymowitz Rice today at 845-639-9300 to speak with an experienced, compassionate attorney for FREE. We will review the details of your case and fight to secure the maximum compensation for your serious injuries.