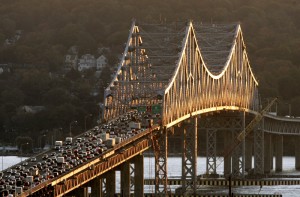 Rob Fellows has been chosen as one of sixteen experts to serve on a visual quality panel for the new Tappan Zee Bridge, aimed at improving the aesthetics of the new bridge and hearing community input about its appearance, the state Thruway Authority announced today.

The panel will provide guidance to the contractors for the project, Tappan Zee Constructors, who have already released preliminary designs. The panel will consist of one chairperson appointed by the Thruway Authority, a visual quality manager from the design-build team and one from the Thruway Authority. It will also have 13 public representatives. Construction is expected to get underway this year for the roughly $4 billion bridge over the Hudson River between Westchester and Rockland counties.

“Along with expanding mass transit, a central goal of this project is to give the people of Westchester and Rockland Counties, as well as the entire Hudson Valley, a bridge they can be proud of,” said Thruway Authority Chairman Howard Milstein in a statement. “The Visual Quality Panel will give the public a direct line to the design team. Their recommendations will help us make informed decisions about what options on the bridge are best for the surrounding communities.”

The 16 members of the panel are: