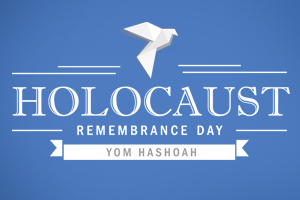 January 27 is Yam Hashoah or International Holocaust Remembrance Day, which is in memory of the victims of The Holocaust. The UN General Assembly Resolution 60/7 designated this date on Nov 1, 2005. On January 27th in 1945, is when the largest Nazi death camp in Auschwitz-Birkenau (Poland) was liberated by Soviet troops.

1945: The Soviet army entered Auschwitz & liberated more than 7,000 remaining prisoners, who were mostly ill & dying. It is estimated that over 1.3 million people were deported to Auschwitz between 1940 and 1945. Of these, at least 1.1 million were murdered. When the Red Army entered Birkenau, they found it almost entirely empty of human inhabitants.

One survivor found in a hospital was Anne Frank’s father, Otto. Anne had died there months earlier from disease. Though most of the storage facilities were already destroyed, the Russians discovered 836,255 women’s dresses, 348,000 sets of men’s suits and 38,000 pairs of men’s shoes.

2001: Survivors of Auschwitz went on a poignant march past the gas chambers which claimed the lives of their fellow prisoners as Europe marked Holocaust Memorial Day;

-700 people, including camp survivors & local Jewish leaders, walked from the Auschwitz-Birkenau camp’s Gate of Death to its giant memorial wall, past the remains of the gas chambers and crematoria.

-The Nazis killed 1.5 million people in Auschwitz, the highest number at any death camp, before hastily retreating from an advancing Soviet army.

-It now houses a museum and is little changed from the day the Red Army troops freed its last inmates.

-Polish PM Jerzy Buzek told the participants they were the “guardians of this tragic heritage of mankind.”

“Not everyone who survived has the strength to share” Auschwitz survivor Hedi Fried said. “We have an extra obligation. We owe it to our murdered parents, the 6 million Jews, 500,000 Gypsies & countless homosexuals, Russians and Poles who died.”

In Germany, there has been a sharp rise this year in violent attacks on minorities. The annual “Day of Remembrance for Victims of Nazism” gives this added resonance. Parliament president Wolfgang Thierse issued a warning about the dangers of neo-Nazism. Germans must show “commitment to democracy and against raging right-wing extremism,” he told Deutschland Radio. “This isn’t about remembrance without consequences.”

Remember our fallen heroes. They are the reason that we are free.