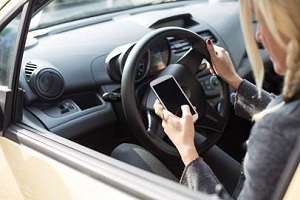 Every year, thousands of avoidable car crashes take place because drivers are using their cell phones or texting behind the wheel.  Legislation is being introduced in the NY State Legislature which gives police a new tool in their mission to identify and punish distracted drivers.

This bill, known as “Evan’s Law,” would give Police access to a piece of technology called a “Textalyzer.” The “Textalyzer” connects to a driver’s cell phone and allows police to monitor when it was last used. Much like a Breathalyzer, this device could help police determine whether or not a car accident was caused by Distracted Driving or texting & driving.

“Evan’s Law” refers to the tragic 2011 death of Westchester County teenager Evan Lieberman. When Evan was 19, he was killed by a distracted driver.  Since his death, Evan’s family, to perpetuate his memory, is fighting to avoid similar tragedies.

The latest data about Distracted Driving paints a disturbing picture of this growing safety crisis. According to the National Highway Traffic Safety Administration:

At Fellows Hymowitz Rice, New York and New Jersey Car Accident lawyers, we understand that sometimes the temptation arises to use a cell phone without a hands free device and even for some people to text.  Please remember Evan and pull over to text and use a hands free device to call.  One distracted split second moment can cause death to the innocent and place your name in an indictment for manslaughter or criminally negligent homicide.  Arrive at your destination safely and then text.  If the urge to call is so overpowering, just pull over with your hazard lights on, or better yet, program your cell to be hands free or buy a hands free device.

For parents, talk to your children before they get a learner’s permit and before they hit the road with an adult license about the danger of distracted driving.  Visit this website for more resources about discussing Distracted Driving with young people.

We hope this never happens to you but, if you or a loved one are injured by an irresponsible and distracted driver, call Fellows Hymowitz Rice at 845-639-9300. When you call, you will speak to an experienced New York and New Jersey Car Accident attorney absolutely FREE.

Fellows Hymowitz Rice will investigate every detail of your accident at no cost to you. You will never pay an attorney’s fee up front, and we don’t get paid until you do. At Fellows Hymowitz Rice, we will fight hard to ensure that your rights are protected.