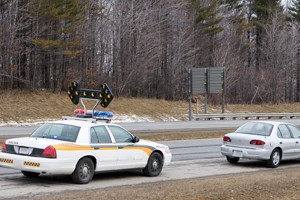 A few months ago, I was riding along the New York State Thruway in Ulster County. Traveling the speed limit, minding my own business, I noticed State Trooper lights behind and I pulled over. The Trooper came up to me and asked for my license and registration and I said, “Officer I was going the speed limit.” His response was “why didn’t you pull over?” I replied “why did I have to pull over?” He then told me “you should have pulled over to the left lane” and my response was “why would I pull over to the left lane?” He retorted “well that’s the law” and my response, even as an attorney, was “what law is that?”

He then explained that when an emergency vehicle or police vehicle is on the shoulder, you have to pull over into the left lane. You have to move over when approaching law enforcement vehicles, fire trucks, ambulances, even tow trucks and construction and maintenance vehicles. I told him, as an attorney, I wasn’t even aware of such a law. He said “just wait here” and I thought he was just going back to check my license and registration and let me go after raising my consciousness. He brought the license and registration back accompanied with a ticket.

I was caught in a State Trooper “sting” pulling over unsuspected motorists like myself, people who were not speeding, minding their own business, and driving safely… some “awareness campaign.”

We want you to be aware of this new law. We want you to know that Governor Cuomo announced on Monday, November 14, 2016, that there would be a week long campaign to raise awareness of New York’s “Move Over Law” and there will likely be other “sting operations.” The one I found myself in involved a civilian vehicle with a State Trooper in front of it and a State Trooper behind. The Trooper behind left flashing lights on and the Trooper ahead was the chase vehicle.

The new “Move Over” law actually is a good idea because it protects First Responders. New York is trying to send a clear message of zero tolerance, so be aware that you have to pull over if the adjoining lane is clear as you pass a police vehicle, fire truck, ambulance or even a tow truck and maintenance vehicle.

Educational flyers will be handed out by State Thruway staff. State Police patrolling the Thruway will conduct an enforcement detail from November 14 through November 18 targeting motorists who fail to pull over when required. I suppose there will be “plants” of not real First Responders and emergency vehicles to see if a motorist complies.

The law is a good idea and people should be aware of it. Jimmy Homkey of Canajoharie, New York was injured fatally injured when he was just doing his job as a tow truck operator, assisting a disabled vehicle on the Thruway. Ronald Demming of Little Falls was also killed while doing his job for a construction equipment company in Herkimer County.

So if you see a First Responder, or you see anyone in the shoulder assisting or responding or working or towing, slow down and move over if it is safe to do so. Firefighters, ambulance workers, and now even sanitation vehicles and garbage and recycling trucks, will require a “move over” when you see them on the shoulder.

Safe driving to all on the New York State Thruway.