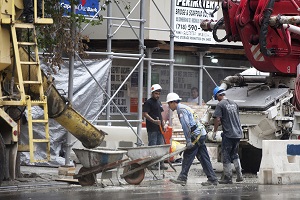 A 22-year-old construction worker was fatally injured on Monday, April 6th while working at a construction site in the Meatpacking District of Manhattan. Police and investigators are still gathering information about this tragic accident, but it appears as though the employee was working below ground when he was trapped underneath falling dirt and rubble that collapsed on top of him. There were no other reported injuries at the site as a result of this accident, and the man was transported to a local hospital where he eventually succumbed to his injuries.

The site in question had received safety complaints dating back to December 5th, 2014 when The New York Department of Buildings received complaints from local residents about debris from the site raining down on to the street. However, when representatives from the agency came out to inspect the site a week later, no violations were found.

This accident serves as a tragic reminder of the risks assumed by employees that work in open construction sites, around heavy machinery, or in any other environment that requires special training and safety measures. Construction companies and government agencies strive to control the impact and frequency of accidents such as this though diligent oversight and mandatory safety practices.

Unfortunately, even with the proper management and oversight by everyone involved, accidents like this one still occur at construction sites all over the country with disturbing regularity.

The New York Department of Buildings keeps detailed records of all reported workplace accidents that take place on construction sites. Here are some important findings from their data collected in 2014:

• As of December 31, 2014, there were a total of 231 construction related accidents in New York City. This number increased from 186 in the previous year.
• These 231 accidents in 2014 resulted in a total of 237 worker injuries.
• The number of workplace fatalities jumped from only 3 in 2013 to 8 fatalities in 2014.
• There were only two listed accident types that resulted in worker fatalities in 2014: “Material Failure (Fell)” and “Worker Fell.” Tragically, this recent workplace fatality was caused by the same type of accident.

If you are one of the thousands of New York or New Jersey residents that makes their living by working on open construction sites, it is important that you know who to call in the event of a tragic workplace accident. Dealing with insurance companies and mounting medical bills can be a difficult process, especially if you or your loved one cannot return to work for an extended period of time.

If you are injured and can no longer work, or if your loved one was fatally injured in a workplace accident or injured on a construction site, you need the experienced, dedicated and compassionate representation of Fellows Hymowitz Rice, New York and New Jersey Personal Injury and Accident law firm.

Call us today at 845-639-9300 to speak with an experienced New York Construction Accident attorney for FREE. We will help you understand the details of your case and will help you deal with issues including medical bills, lost wages, and insurance matters.

At Fellows Hymowitz Rice, we will advocate for you, protect your rights, hold wrongdoers accountable and fight to obtain the maximum compensation for your losses.