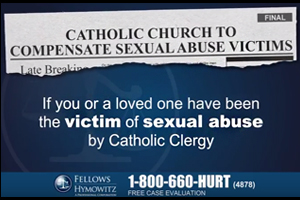 Without the IRCP, New York’s statute of limitations would prevent many, if not nearly most, of the claims. No matter what your age, if a priest or deacon of the Brooklyn Diocese abused you as a minor, you can come forward with previously unreported allegations of sexual abuse and be eligible to participate in Phase II of the compensation program.

Fellows Hymowitz Rice PC is a law firm dedicated and committed to helping victims of sexual abuse and molestation by clergy.  Your voice can be heard.  You need not keep silent any longer.  We will help you through the entire process and stand by your side every step of the way.

Consider calling the experienced attorneys at Fellows Hymowitz Rice today at 845-639-9300 for a free, confidential consultation.

We are ready to help you obtain some measure of closure and we will be both an aggressive, yet compassionate and understanding advocate.

If a priest or deacon of either the Roman Catholic Diocese of Brooklyn or the Archdiocese of New York sexually abused you as a minor, you can reach out both discreetly and in confidence to the attorneys of Fellows Hymowitz Rice. Call 845-639-9300 for a free confidential consultation.