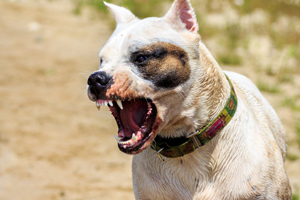 A New Yorker is in serious condition after sustaining multiple dog bites during an attack last weekend. The man was walking through the Belmont section of the Bronx, NY, on 9/11 when he saw a woman walking her two pit bull dogs. According to witnesses and security camera footage, the man tried to pet the pit bulls just before the attack. Tragically, the dogs broke free of restraints and dragged the man to the ground, biting him multiple times before finally being pulled off.

One witness tried to come to the man’s aid, but was also bitten and attacked. Both men were taken to the hospital in serious condition. During the attack, the victim’s ear was ripped off, and he also suffered multiple bite wounds. Thankfully, he appears to be in stable condition.

Dog bites may seem like isolated or uncommon events, but they are in fact a very real and widespread health problem that impacts millions of Americans every year. Statistics about dog bites in the U.S capture a widespread and troubling problem:

While it is currently unclear whether the pit bulls were intentionally let off of their leashes by the owner, or simply broke free, she now faces serious legal consequences. The dog’s owner is currently in jail and faces eight counts of assault, and two counts of reckless endangerment.

In New York, a dog owner is fully responsible for controlling an animal with a vicious propensity.

If you or a loved one was attacked and injured by a dog, you may be entitled to compensation. Dog bites not only can cause serious physical injuries, they also can leave lasting mental and emotional effects such as Post Traumatic Stress Disorder (PTSD).

Victims of dog bites and attacks often require reconstructive surgery when dog owners fail to control their animals, especially when pets have previously bitten or injured someone.

Here are some important tips to remember when confronted by a dog:

• Never approach or try to pet a strange dog without first getting the owner’s permission. Even if a dog appears friendly, you never know what kind of behavior the animal has displayed in the past.
• Read the dog’s body language and never approach a dog that is barking or growling, has a stiff or tensed tail, has its ears pulled back or is showing its teeth. These are all signs of aggression.
• If you think a dog is about to attack, never turn your back and try to run. Instead, don’t panic, remain perfectly still and avoid eye contact. This helps put the dog at ease.
• Never approach a dog when it is eating or playing with a bone

Dogs are beloved members of many of our families, but it is important to remember that even with all the proper training and attention, they are still animals, especially certain breeds.

If you or a loved one was bitten or attacked by a dog, call the experienced New York and New Jersey Dog Bite and Personal Injury lawyers of Fellows Hymowitz Rice right away at 845-639-9300.

When you call, you will receive a FREE, no-obligation consultation with a dedicated and hardworking New York and New Jersey Personal Injury lawyer. We will investigate your case, get to the bottom of what caused your injuries, and determine who is responsible for paying for medical bills and lost wages.

At Fellows Hymowitz Rice, if we take your case, you will never pay any legal fees unless we recover for you. We don’t get paid until you do.