JUST THE TWO OF US??? Make sure your private summer getaway is truly private 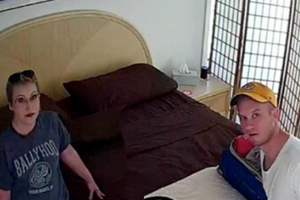 It’s enough to make your skin crawl.  The two of you may not be alone in your vacation getaway this summer.  With the rise of technology and hidden surveillance cameras – accessible from your smart phone.  We at Fellows Hymowitz Rice PC have noticed an alarming rise in video surveillance and privacy claims.

Imagine renting a room or a property this summer, kicking off your shoes and jumping into bed, and finding out that you’re being watched. Or worse: Not finding out until after your stay?

Huffington Post reported that a couple last year uncovered hidden cameras in their Airbnb rental in Florida.  Luckily, they noticed the hidden cameras in a small hole in the bedroom’s smoke detector after only one night and called the local police.

Most states have a statute to protect against such egregious invasions of privacy. In New York there are several unlawful surveillance laws already on the books and in New York, the crime was recently made a felony in response to public outcry.

If children are being recorded, or worse, disseminated, the Peeping Tom will likely face federal charges.

Fellows Hymowitz Rice attorney Daniel J. Solinsky handled such a matter in 2013.  While the terms of the conclusion of the case are confidential, the matter was handled in Federal Court in Long Island and involved the rental of a summer home. The family involved were not only horrified to learn that they were videotaped in all rooms of the home including the bathroom and shower, but that their young children were as well.  Cameras were hidden in the smoke detectors, radiators, and television speakers.   Even more horrifying was the fact that the landlord was able to manipulate the camera remotely.  Dan was able to have the court keep the names of the victims anonymous to spare them publicity and further embarrassment.  The case was favorably concluded before any of the parties had to be subject to a deposition.

We encourage you to take precautions to protect yourself:

If you believe you were the victim of unlawful surveillance, call Fellows Hymowitz Rice, PC right away.  We value your privacy and will make sure your case is handled with dignity and discretion.