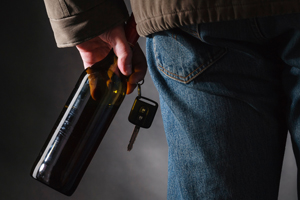 Last Sunday, a sport utility vehicle overturned on the Garden State Parkway. One local resident died and several others were injured. Police announced that the SUV driver was intoxicated.

According to Police, the drunk driver was traveling south in the express lanes of the Garden State Parkway at around 7am. His SUV overturned. The driver and a passenger were not wearing seat belts. They were ejected from the vehicle. The passenger that was thrown from the SUV died at the scene. Two other passengers with seat belts had non-life threatening injuries.

The intoxicated driver is facing one count of vehicular homicide, two counts of assault by auto, and DUI. He is at a local hospital and will be taken into custody upon discharge.

Drinking and driving is a deadly mix. Drunk driving, although preventable, causes countless deaths and injuries every day.

Unfortunately, despite the best efforts of law enforcement and drunk driving awareness organizations such as MADD, drivers continue with this reckless and criminal behavior. The statistics are disturbing:

• According to the Center for Disease Control, a person is killed in a traffic accident involving a drunk driver once every 52 minutes in the U.S.
• There were nearly 30,000 drivers arrested for DWI or DUI in New York in 2013
• According to Mothers Against Drunk Driving (MADD), there were a total of 510 drunk driving fatalities in New York and New Jersey in 2013.

If you or a loved one was injured by an intoxicated, negligent or reckless driver, call the dedicated and experienced New York and New Jersey Car Accident and Drunk Driving Accident lawyers of Fellows Hymowitz Rice at 845-639-9300.

Call today to speak with one of our hardworking, compassionate New York and New Jersey Personal Injury attorneys. They’ll speak with you for free, and help you understand the details of your case. At Fellows Hymowitz Rice, we will investigate your accident and fight hard to ensure that you receive the justice you deserve.

When you trust our firm to handle your serious Car Accident or Personal Injury case, you will never pay an attorney’s fee unless we achieve a recovery for you. At Fellows Hymowitz Rice, we don’t get paid until you do.