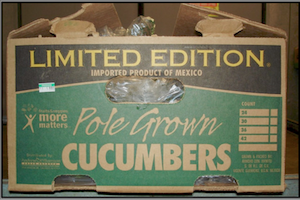 The Food and Drug Administration is warning consumers across the United States about a massive and potentially deadly Salmonella outbreak that has left hundreds of people seriously ill. The contamination, which has been linked to cucumbers grown in Mexico and distributed throughout the United States, is causing hundreds of illnesses, and even deaths, in more than 30 states, including New York. The FDA is warning consumers to be extremely cautious and take the proper steps to avoid exposure to this dangerous bacteria.

Consumers first began reporting Salmonella-related illnesses as early as July of 2015. As of Tuesday, September 8th, there have been more than 341 cases of Salmonella poisoning linked to this outbreak in more than 30 states throughout the U.S, including 4 confirmed cases in New York State.

The food distributor responsible for selling the contaminated produce, Andrew and Williamson Fresh Produce located in San Diego, CA, has issued a recall of all “Limited Edition Pole Grown Cucumbers” sold between August 1 and September 3rd 2015. The FDA is advising all consumers that may have purchased this produce to return the product to their local point of sale for a refund, or throw it in the trash immediately.

Symptoms of Salmonellosis usually appear between 12 to 72 hours after exposure, and in otherwise healthy individuals, the illness generally lasts between 4 and 7 days. However, elderly adults, young children and individuals with compromised immune systems may be at risk to develop much more severe, and potentially deadly symptoms.

When left untreated in people with weakened immune systems, the Salmonella bacteria can move from the intestines in to the bloodstream, creating a potentially life-threatening situation.

If you or a loved one has been harmed by a defective product, or from a “not your fault” accident, you benefit from an experienced legal team. Call the hardworking and compassionate New York & New Jersey Product Liability lawyers at Fellows Hymowitz Rice right away at 1-800-660-HURT.

When you call, you can speak with a New York & New Jersey Personal Injury Attorney for FREE.

You can trust Fellows Hymowitz Rice to provide the dedicated and aggressive representation you need to ensure you receive maximum compensation. The call is free, and you will never pay a fee unless we recover.