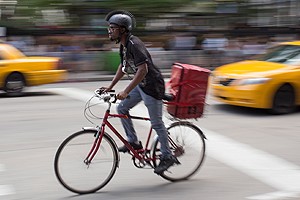 The summer months are a perfect time to go out for a bike ride, but please be sure to protect your safety and pay attention to your surroundings at all times. Cycling on New York’s roads and highways can be a delight, but also can be dangerous, and far too many serious and even fatal injuries occur every year because drivers fail to safely share the roads.

Recently a new bill was introduced in the New York state legislature that would require motorists to give cyclists at least three feet of space when attempting to pass.

Many lawmakers and bicycle safety advocates hope that the bill will be reintroduced and passed in the 2017 session. Supporters of the bill hope that this new law would help prevent serious bicycle accidents from occurring in the future.

Unfortunately, cyclists are more susceptible to suffering serious injuries during an accident compared to occupants of passenger vehicles. Here are some statistics you should keep in mind while riding through New York’s beautiful summer scenery:

• There were 5,694 cyclists injured in New York State in 2014
• 47 New York bicyclists were killed in traffic accidents in 2014
• In West Chester County alone, there were 214 collisions between cyclists and motorists from 2009 to 2014
• 11 bike accidents resulted from drivers failing to grant a cyclist the right-of-way
• 9 accidents were caused by driver inattention or distraction
• Errors by cyclist contributed to 19 of the 47 fatalities in 2014
• Nationally, 720 bicyclists were killed in 2015; a 4% increase from the previous year

Cyclists and drivers of motor vehicles have a responsibility to safely share the road. If you or a loved one have the misfortune of suffering a serious bike accident that was caused by a distracted, drunk, negligent, or careless driver, call Fellows Hymowitz Rice right away at 845-639-9300. The New York Bike Accident attorneys will work hard to seek the justice you deserve.

When you call, you will speak with an experienced, compassionate New York and New Jersey Personal Injury attorney for FREE. We will investigate every detail of your situation at no cost to you.

At Fellows Hymowitz Rice, we will fight hard to protect your rights, and our attorneys will not rest until you receive the compensation consistent with your injuries and losses. You will never pay an attorney’s fee up front. We take all cases on a contingency-fee basis, which means that we don’t get paid until you do.