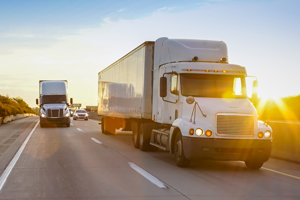 Federal law requires that commercial truckers not drive their rigs 14 hours after first coming on duty. After that, there must be a ten hour break before they can drive again.

USA Today analyzed 30 million timestamps in Southern California. They found 580,000 potential time violations. When it appeared that a truck was being driven without the ten hour break, truckers without adequate sleep are dangerous. Lack of sleep is just as much a danger as operating a truck while impaired.

In August 2013 a trucker at a deposition said he often broke fatigue laws. This explains why he barreled into stopped traffic at 55 miles per hour killing a teenager and sending seven people to the hospital. Seven months after that another trucker finished his 45th hour on the clock in three days before he ran over and killed a woman crossing the street. Another trucker was moving containers for 15 hours in May 2013 when he crashed his rig injuring four people.

Unfortunately, the trucking industry has a history of having drivers work reckless amounts of overtime. USA Today’s investigation demonstrated that fatigued truckers are a near constant threat on the road especially around America’s busiest ports.

Here are some suggestions:  If you’re on the Thruway and you look in the rearview mirror and you see an 18-wheeler too close behind or tailgating, move over to another lane. Let the truck pass. An accident reconstruction specialist once told us what he considers the most hazardous part of driving around New York State. It was traveling in front of an 18-wheeler. If you have to suddenly brake, the 18-wheeler takes a longer time to stop and if it is right behind you it’s going to be a bad day, perhaps your last.

If you are passing a truck on the Thruway at night you might consider flashing your lights before you go by and then making sure you continue ahead until the truck is a very safe distance behind before pulling over into the right lane. Never drive your car in a truck’s blind spot. Never stay too close to a truck lane to lane. If you see a truck weaving or its rig moving back and forth, immediately slow down and get as far away from the rig as possible.

Truckers might think they can flout the regulations and drive safely, popping amphetamines to stay up, but eventually as they say on the street “the chickens will come home to roost” and sooner or later there will be an accident waiting to happen.

Sadly, some trucking companies push their drivers into debt by requiring them to buy trucks through a company-sponsored lease or purchase programs. This traps drivers in a vicious cycle sometimes resulting in them being paid less than $1.00 an hour. They are trapped in this vicious cycle and trucking companies all too often place profit over safety. There is the economic benefit to violate fatigue rules.

This is not an area that the federal government should deregulate. This is an area where there should be enforcement to protect the lives, health and safety of motorists and pedestrians. There should be enforcement especially at port facilities where violations are routinely flouted. For the government to rely on driver honesty and trucking companies to enforce fatigue regulations continues to put the public at risk.

The bottom line is when you’re on the road and you see an 18-wheeler or any large rig, be vigilant and the best advice is to stay as far away from it as possible.