E-Cigarette Use in Young People Can Harm Developing Brains 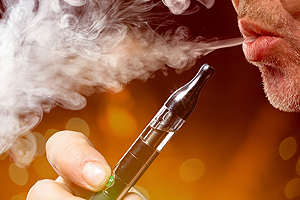 The United States Surgeon General, after a study, has concluded that e-cigarettes are now the most commonly tobacco product among youths, even exceeding tobacco cigarettes.  E-cigarettes turn nicotine into inhalable vapor.  The vapor can harm developing brains of teenagers and the aerosol created is harmful for people around the user.

The study found that adolescent brains are particularly sensitive to nicotine’s affects producing a cloud of nicotine induced neural and behavioral alterations.  The use of e-cigarettes by high school students increased an alarming rate of 900% from 2011 to 2015.

The Center for Disease Control and Prevention found that 16% of high school students used e-cigarettes in 2015.  The main concern of the report is that nicotine is really a dangerous drug and can affect their developing brain.  Nicotine has been shown in animal models to cause damage in adolescent brains.

Another finding was that there was no evidence that increasing e-cigarette use led to a drop in smoking.  Manufacturers of e-cigarettes have mimicked the marketing techniques of the tobacco industry in an effort to appeal to youth and young adults.  Another study in a medical journal called Pediatrics found that young people who smoke flavored e-cigarettes were more at risk of taking up traditional smoking.

Nicotene, whether it’s inhaled by cigarette or e-cigarette, still has addictive and harmful affects.  The bottom line of the study is that e-cigarette use is of serious concern and requires government action.  Discourage, as best as you can, your teenager from using nicotine in any form.