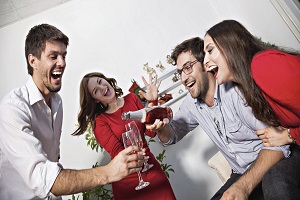 On the evening of December 10th, a driver in Manhattan’s Lower East Side shopping district recklessly drove into numerous cars and pedestrians before crashing into a storefront. The allegedly intoxicated driver caused serious injuries and thousands of dollars in property damage during one of the busiest shopping periods of the year.

The driver, who authorities stated had a Blood Alcohol Content reading over twice the legal limit at the time of the incident, was attempting to flee the scene of a separate vehicle accident she had caused when her car careened over a curb and onto the sidewalk, injuring 5 pedestrians and destroying a storefront display.

Everyone involved in the accident was taken to the local hospital with relatively minor injuries. However, with this accident occurring in one of Manhattan’s most crowded shopping areas during the busiest shopping period of the year, the damage could have been much worse.

These statistics are eye-opening, and serve as a reminder that all drivers must exercise an extra level of precaution on the roads during the holidays. Office holiday parties, family get-togethers and nights out with friends are far more prevalent during the holidays than at any other point in the year, leading to steeply increased rates of drunk driving accidents.

Here are some driving tips to remember during your holiday celebrations:

Buckle Up: Even if you are just going for a ride around your neighborhood, make sure that you and all passengers have properly secured their seat belts.
Don’t Rush: Everyone has a lot to plan for during the holidays, and it can sometimes feel as though there are not enough hours in the day to get everything done. However, remember that it is always more important to arrive in one piece. Leave yourself extra time, don’t rush and make safety your number one priority.
Drive Defensively: It is important to keep an eye out for any driver that may appear to be intoxicated or driving recklessly. Keep your eyes peeled and avoid all distractions, especially your phone, while behind the wheel.
DON’T DRINK AND DRIVE: This goes without saying, but now more than ever is the time to stay responsible and designate a sober driver if you will be drinking. Law enforcement steps up their presence on the roads during this time of year, so as always, never get behind the wheel if you’ve been drinking.

If you have been injured or sustained loss in any type of accident as a result of someone else’s negligence, call us for a free confidential consultation at 845-639-9300.