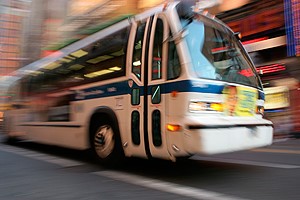 Drunk Driving remains a serious threat to the safety of all drivers. Especially during the holiday season, when traffic volume is higher than normal, motorists should take special care to be vigilant, drive defensively, and NEVER get behind the wheel of a car if impaired or drunk. Select in advance of a holiday party and use a designated driver instead.

Sadly, on Monday, 11/30, an intoxicated driver caused a head-on collided with a tour bus in Ramapo, NY. Police say the crash occurred around 3am Monday morning on Route 45. Fortunately, the tour bus was not carrying any passengers. Both drivers escaped with minor injuries.

The drunk driver faces serious criminal charges. Penalties will be more severe because he fled the scene on foot. Police say the driver crawled out of the wreckage and did not wait for authorities to arrive.

The driver turned himself in to Haverstraw Police later that afternoon. He was charged with Driving While Intoxicated. Additional charges will likely follow.

Read more about this accident here.

If you or a loved one suffered injuries in a car accident that was caused by a drunk or intoxicated driver, call Fellows Hymowitz Rice right away at 845-639-9300.

When you call Fellows Hymowitz Rice, you will speak with an experienced New York and New Jersey Car Accident lawyer absolutely FREE. We will investigate every detail of your accident and fight to get you the maximum recovery.