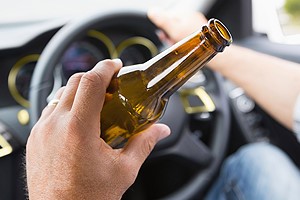 Drinking and Driving continue to be a safety menace which each year take the lives of thousands. Last week, a husband and wife were fatally injured in a car crash caused by a drunk driver.

The couple perished, but the intoxicated 23-year-old driver survived. He is in a local hospital, currently under arrest for DWI. Authorities say charges could be increased pending further investigation.

The crash occurred at the intersection of Lakeland and Ocean Avenues in Ronkonkoma. The couple was in their pickup coming home from a family dinner. Their car was t-boned. Police and witnesses said that the drunk was traveling at a dangerously high speed and ran a red light.

Another all too common tragic but preventable accident. Here are some important safety tips for drivers that may help you avoid a preventable car crash with a drunk driver:

• Be Cautious at Night: According to the National Highway Traffic Safety Administration (NHTSA), the rate of alcohol impairment in fatal car accidents was almost four times greater at night than during the day. Avoid driving late at night when you can, especially on rural roads and highways.
• Be Aware of “Drinking Holidays”: Studies have shown that certain days of the year are closely associated with a rise in drunk driving accidents. Holidays such as St. Patrick’s Day, the Fourth of July, Labor Day and Memorial Day are considered especially dangerous.
• Report Suspicious Driver Behavior: If you notice another motorist swerving, drifting out of their lane, ignoring posted traffic signals, or otherwise driving erratically, pull over and call 911 right away. If you can provide the location, make, model or license plate of the car, the police may be able to prevent another tragedy.

We hope that you will never be injured in any car crash, whether caused by a drunk driver or from someone else’s negligence.  Always wear your seat belt.  If you do drink, have a designated driver.  If you are at the wrong place at the wrong time and are injured because of someone else’s fault, call Fellows Hymowitz Rice at (845) 639-9300.  You can speak with one of our experienced New York and New Jersey Car Accident attorneys absolutely free.

When you call Fellows Hymowitz Rice, if you have been wrongfully injured, we will do whatever is necessary to hold someone accountable.  Your case will be investigated in detail.  There is never a charge and you will never pay an attorney’s fee up front because we don’t get paid until you do.  We will fight hard to protect your rights and interests and secure, in a courtroom or by settlement, the compensation you deserve for being injured.