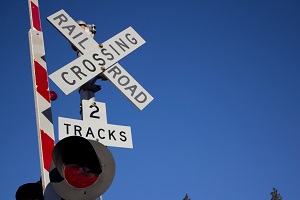 A devastating and tragic scene played out late last week when a rush-hour Metro-North commuter train collided with an SUV that was stopped on the train tracks at a railroad gate crossing. This terrible accident claimed the lives of the SUV driver and 5 passengers in the forward cars of the train, and left dozens more injured.

This accident is the worst in the history of the Metro-North railroad company and has left the entire communities of Valhalla, Westchester County, the Hudson Valley, and beyond, reeling at its terrible aftermath. This tragedy serves as an unfortunate reminder that gate crossings can be deadly, and must be approached with caution and vigilance by all commuters.

Officials say that these types of accidents are not totally uncommon, and in most cases pose significant danger only to the driver of the vehicle on the tracks. The following statistics provide a bit of background on the frequency and severity of gate crossing accidents in New York over the last decade:

– Since 2004, there have been 371 gate crossing crashes in New York State.
– In these 371 crashes, 137 people were injured, and there were 63 fatalities.
– Every year, between one and five gate crashes in New York involves a Metro-North train.
– There have been a total of 30 gate crossing accidents involving Metro-North trains since 2004.
– Approximately 50% of gate crash accidents occur at crossings with the proper warning and safety equipment in place.
– 25% of those fatally injured by gate crash accidents maneuvered past the lowered warning gates and on to the train tracks.

Last week’s accident was obviously very different and much more severe than previous crashes due to the devastating loss of life and severe injuries suffered by passengers on the train. State officials are now exploring a bill that would examine all 5,304 gate crossings in New York to determine which are the most dangerous and in need of additional safety measures in order to prevent future tragedies such as this one.

Here are some important safety tips to remember when approaching a gate crossing:

– When in Doubt, Stay Back: Often times, railroad gate crossings are located near stop signs or other large intersections. In some cases, this can create a scenario where cars waiting in line will be forced to stop on railroad tracks. If you find yourself in this situation, stop your vehicle behind the tracks and never directly on top of them, even if the warning lights are not illuminated.
– Know the Timing: Warning lights will start to flash at least three seconds before the gates are lowered and 20 seconds before a train arrives. NEVER attempt to race across the tracks when you see the warning lights start to illuminate, even if the gates have not yet begun to drop.
– NEVER Drive around the Gates: Unfortunately, some drivers feel they can get around the warning gates and save time by not waiting for a train to pass. Even if you think you have time to cross the tracks before a train in the distance gets to you, this action is incredibly risky. If there is another train coming from a direction you can’t see, if your car becomes stuck or stalled on the tracks, or if any one of a number of other scenarios plays itself out, this behavior will put you and those around you at extreme risk.
– Plan for the Worst-Case Scenario: In the event that your vehicle does stop or stall on train tracks, or you get stuck between the gates, the most important thing to remember is not to panic. If the gates are lowered while you are on the tracks, do not leave your car. Instead, move forward and crash through the warning gate to get to the other side of the tracks. These gates are designed to break away when hit. If your car stalls and you cannot move it off the track yourself, get out of the vehicle, get to a safe distance and immediately dial 911.

The Metro-North train engineer, who survived the crash, is described as putting forth a “heroic effort” after the accident to enter the wreckage and get victims to safety in any way he could. At Fellows Hymowitz Rice, we want to express our gratitude to the train’s engineer and all of the emergency and rescue crews that responded to the scene to assist the victims. Our thoughts and prayers are also with the victims and their families in this tragic time.

At Fellows Hymowitz Rice, we know that Train and Bus Accidents can be devastating. Millions of New Yorkers use public transportation every day, and with this volume of traffic accidents can happen even if everyone follows the proper safety precautions. When a malfunction or act of negligence causes a serious injury to you or a loved one, you will need an experienced legal team that has handled these types of cases before.

Trust Fellows Hymowitz Rice, PC, New York and New Jersey Personal Injury law firm, to handle your case with the utmost care, compassion, and dedication. Our attorneys will work tirelessly to defend your rights as a victim and secure the maximum compensation to which you are entitled. Call our legal team today at 845-639-9300 for a FREE, confidential and no-obligation consultation.