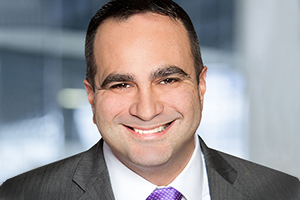 Fellows Hymowitz Rice is proud to announce that Daniel Justus Solinsky has joined the firm.

Dan has extensive experience as a litigator and trial attorney.  He comes from a prominent Long Island personal injury practice.  His ability to achieve unusually high verdicts in notoriously conservative courtrooms throughout New York State brought him accolades among his peers.

Upon joining Fellows Hymowitz Rice, Dan was recognized as a 2018 Super Lawyer.  This honor is only bestowed upon the top 5% of attorneys in the New York Metropolitan Area.

Dan’s clients include those who were seriously injured from negligence, municipal fault and defective products.  He is known in both the State and Federal Courts.

He lectures other trial attorneys on Municipal Law, Jury Selection and Depositions.  Dan teaches other attorneys four times a year on behalf of the New York State Academy of Trial Lawyers.  Dan has authored articles for the New York Law Journal as well as co-authoring the 2017 Municipal Law Update for the Academy.

His legal career began as a prosecutor in Bronx County where he was assigned to a prestigious Trial Bureau.  After sharpening his Courtroom skills in the rough and tumble halls of the Bronx Supreme Court, he then became a Principal Court Attorney for two Administrative Justices.

On joining the firm, Dan said, “I am excited to be a part of Fellows Hymowitz Rice, a firm with a proven record of success in the Hudson Valley and beyond.  I will work hard to uphold their tradition and values.  I will work tirelessly and never take for granted the trust a client places in me.”

Dan notes, “I am extremely fortunate to have been able to participate in trials as both a litigator and as an advisor to Judges.  I believe this not only gives me a unique perspective when preparing and trying a case, but also when drafting important legal documents, I am keenly aware of what the Judges are looking for.”

When asked about those he represents, Dan emphasizes that he “treasures the connection I have with my clients from the inception of their case until the very end – only through this strong bond can I tell their story effectively.”

We at Fellows Hymowitz Rice look forward to a long and prosperous future with this extraordinary trial lawyer.