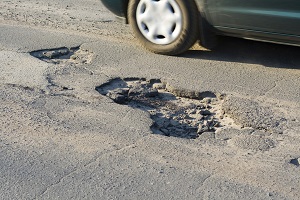 As the snow and ice finally begins to melt and winter gives way to spring in the Hudson Valley, a new set of challenges emerges for area motorists. Rather than having to contend with icy, snowy and slick roadways, drivers must now do their best to avoid the potholes that spring up after a winter hidden under the ice.

Potholes are formed when moisture seeps into small cracks in the pavement. Once water gets into the concrete, it is only a matter of time before fluctuating temperatures and constant traffic create larger and larger cracks which will eventually form into potholes. In many cases, potholes lead to dangerous road conditions and can be a major hazard for drivers and their vehicles.

Fellows Hymowitz Rice attorney and founding partner Robert Fellows was recently interviewed on the topic of potholes, the dangers they create on Rockland County roadways, and how drivers who sustain damage to their vehicles through no fault of their own can fight for compensation.

Unfortunately, the deck is often stacked against drivers that sustain vehicle damage from a pothole.

“The burden is on the victim. The pothole prevails, unless you jump through legal hoops.”
– Robert Fellows

The New York State Thruway Authority is currently scrambling to keep up with the large number of potholes being reported on Rockland County roads. The Thruway Authority has already spent more than $900,000 on emergency repairs so far this year, but this effort has only scratched the surface of all the work that needs to be done to ensure all roads are safe for motorists. Currently, authorities need to focus their efforts on the roads and streets that have received the most complaints. This means that smaller, less busy streets could continue to be neglected until later in the season. At this time of year, the weather also still plays a major role in how quickly and effectively the Thruway Authority can fill existing potholes.

If you are a Rockland County motorist that has been injured or sustained vehicle damage from a pothole or poorly maintained roadway, here are some steps you can take to try and secure compensation from the State.

• Familiarize Yourself With Your Insurance Coverage: Many drivers worry about filing a claim with their insurance company after sustaining damage from a pothole and fear that a claim could cause their rates to increase. A good rule of thumb is to go by your deductible. If you sustain major body or engine damage that will cost far more than your deductible, it is a good idea to file the claim. However, if the damage is smaller, cosmetic or cheaper than your deductible to repair, filing a claim may not be worth your time or effort.
• Speak Up: Drivers are encouraged to assist local authorities by sharing locations of major potholes. If you have spotted a pothole in Rockland County, you can now Tweet the location of the pothole to @rocklandgov, or call the Rockland County Government at (845) 364-2745.
• File Your Claim: If your vehicle has been damaged by a pothole, you can file a formal claim with the Thruway Authority Claim Unit. Visit their website here, where you can find contact information and a Vehicle/Vessel Damage Claim form. If you feel the need to file a formal claim, Fellows Hymowitz Rice, P.C can help you understand the details of your claim and make sure that you get the results you need.

If you or a loved one has been injured or sustained major damage to a vehicle as a result of a pothole, the experienced Accident & Municipal Claims attorneys of Fellows Hymowitz Rice can help you obtain full and fair compensation. Call us today at 845-639-9300 to receive a FREE, confidential consultation. We will help you understand the details of your case, and will stand with you from the start of your claim through to the finish.

Since 2013, the New York State Department of Transportation has paid out over $70,000 in claims statewide, and over $14,000 in claims in Columbia, Dutchess, Orange, Putnam, Rockland, Westchester and Ulster Counties, specifically.

If you or a family member are ever injured in a car accident or any accident that was not our fault, call the experienced injury attorneys of Fellows Hymowitz Rice, P.C,.  We’ll fight for your rights and secure the compensation you deserve for your injuries and damages.