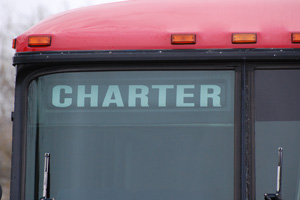 Last week, a Dahlia charter bus driver was speeding and ran a red light resulting in the death of the driver, a passenger on another bus and a pedestrian.  The driver struck a Metropolitan Transportation Authority bus making a right turn.  Sixteen people were also injured on that bus.  The force of the crash sent the Dahlia charter bus through the front entrance of a fast food restaurant.  Police said another person walking upon the sidewalk was pinned and killed as was one of the people on board the MTA Q20 bus.  Sources have told the media that the driver of the charter bus ran a red light and they are looking into the possibility that he fell asleep behind the wheel.  The driver was a former city bus driver fired by the MTA in 2015 after he was arrested while off duty in CT for drunk driving.

Since 2015 the charter bus company have been investigated 35 times, resulting in 11 violations for unsafe driving.

Dahlia Charter bus company was required by state law to notify the NYS Department of Motor Vehicles that this driver was operating one of their buses.  Perhaps if the DMV had been notified the driver would have never gotten behind the wheel.

A 68 year old pedestrian was just taking a walk on the sidewalk when a bus slammed into him and he was pronounced dead at the scene.  The passenger killed on the MTA bus lived in the same neighborhood.  This sounds like an avoidable tragedy and it smells of gross negligence of a charter bus company with a bad history.  Maybe the bus company will be charged criminally for not notifying DMV which might have prevented the driver from ever getting behind the wheel.

If you or a loved one are involved in a bus related accident, here are tips to help ensure you obtain the compensation you deserve:

We’ll speak with you for free, and explain your rights in simple terms. We will investigate every detail of your accident claim at no cost to you and fight hard to protect your rights. You need a top rated injury lawyer to advocate for you.